Sudhir Pai, Executive Vice President, Data and Robotics Division, was featured in Upstream, one of the most respected publications in the international energy industry.

In the article, Editor Russell McCulley puts together the pieces of the puzzle in Pai’s vibrant career that got him working in oil and gas, commercial aerospace and renewables. Pai credits his long-standing passion for problem-solving and his continuous enthusiasm for technology as the common denominator throughout his 40 years in business.

In October 1969, Neil Armstrong and his fellow Apollo 11 astronauts touched down at Santacruz Airport in what was then known as Bombay, India, a stop on a world tour following the first moon landing.

Among the thousands waiting at the airport to greet them was a young Sudhir Pai, who had the good fortune to shake hands with the first person to walk on the moon.

“For three days I did not wash my hand – it had touched the hand of a person who had actually stepped on the moon!” exclaims Pai, executive vice-president of the Data and Robotics division at Acteon.

It is a story Pai has told countless times, no doubt, but repetition does not seem to have dimmed the delight and sense of wonder he felt that day.

Likewise, some 40 years in business — the bulk of them at Schlumberger or one of its related businesses — have not dampened his engineer’s enthusiasm for technology, whether it is to be used in space, the troposphere or on the bottom of the ocean.

As it happens, Pai has some experience with each. 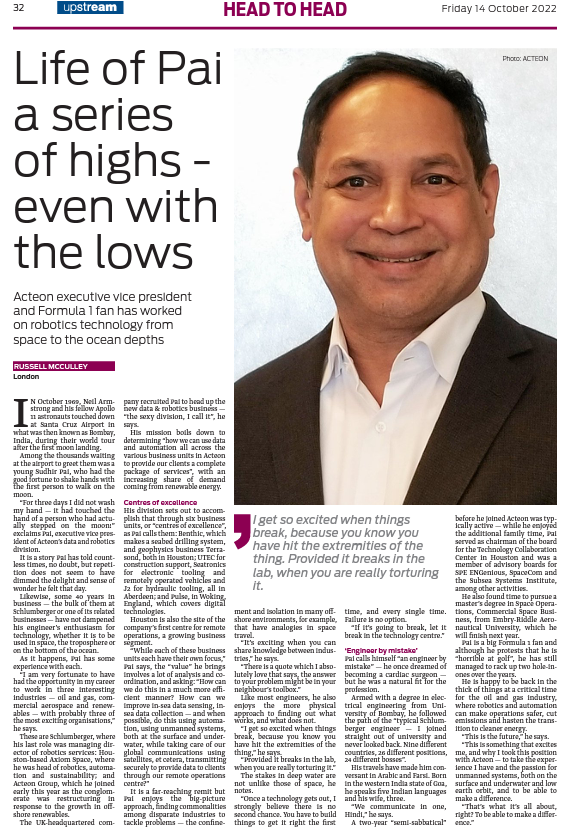