Bespoke procedures, lighter mooring equipment and smaller vessels can contribute to both a reduction in the project’s carbon footprint and improved operational efficiencies.

In August 2019, InterMoor, an Acteon company, completed the offshore installation of a Wave Energy Converter (WEC) 140km North East of Aberdeen. The device was moored inside the 500m exclusion zone of a subsea production manifold. It completed a 210-day trial through the harsh North Sea winter before being recovered.

OPT’s PowerBuoy consists of a float, spar, and heave plate. The float moves up and down the spar in response to the motion of the waves, generating electricity for the onboard payload or export to nearby marine applications using a submarine electrical cable.

The team was tasked to deliver against the following mooring requirements: 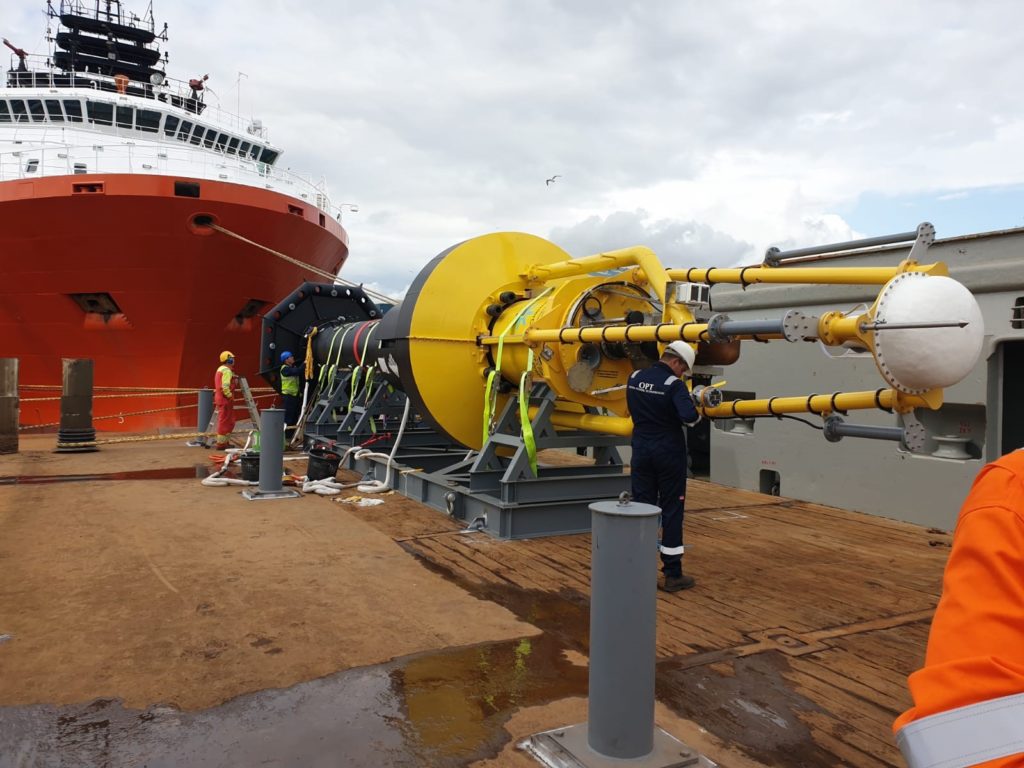 InterMoor was responsible for the following work scope:

1 – Installation aids to optimise the use of an AHV

Before this trial, the WEC had never been deployed in the North Sea from a single vessel. A large crane barge and supporting workboats were previously used, as well as divers to hook up the WEC to its mooring system. InterMoor was tasked with simplifying deployment by removing any need for additional vessels or air diving personnel during hook-up.

The solution was to develop a bespoke deployment grillage, which could be welded to the vessel deck without impeding the anchor handling equipment. This grillage enabled the mooring system to be pre-laid, then when the WEC was ready to be deployed, two of the three lines were recovered back to the vessel, secured and connected to the unit before it was lifted off the deck and deployed into the water.

To maximise crane reach over the stern, a bespoke sling arrangement was also designed and installed below the vessel crane hook, incorporating remote controlled hooks.

2 – Design of a hybrid mooring system

To demonstrate cost-effectiveness, InterMoor strived to maximise the use of mooring equipment already available in house.

A key challenge during deployment was avoiding damage to the lightweight fibre ropes. Small diameter fibre ropes form more than half of the hybrid mooring system and are susceptible to damage from contact with steel or other ropes. InterMoor’s installation procedures were developed to minimise rope contact with the vessel deck and reduce the likelihood of line entanglement. Anti-chafe protection sleeves were also used, and bespoke lightweight chain adaptors were designed and inserted into the lines.

Keen to explore alternative installation and recovery methods, the project stakeholders wanted to demonstrate that the WEC could be towed from the offshore test site back to port using the mooring system recovery vessel. The WEC had never been transported in the North Sea in this manner, so the towing operation was modelled by InterMoor to determine maximum allowable sea states for tow and maximum permissible tow speeds.

One step in understanding the towing constraints was to develop a towing arrangement that would pitch the buoy back under tow allowing it to ride up in the wake of the vessel rather than pitch forwards creating instability. InterMoor’s in-house engineering team conducted an analysis in Orcina’s Orcaflex software at various sea states and tow speeds and concluded that it was possible to tow the WEC safely at an acceptable tow speed in sea states of 3m Hs.

Specific towing arrangements were also proposed for the recovery of the WEC.

The project, which was the first of its kind in the United Kingdom Continental Shelf (UKCS), was intended to assess the feasibility of monitoring a 500m exclusion zone using an HD camera and radar target acquisition equipment, mounted on an autonomous buoy, powered exclusively by wave energy.

InterMoor has extensive experience positioning vessels, completing well abandonment projects, and changing out mooring systems within the 500m safety zones of live oil and gas infrastructure, and are competent in putting together adequate risk assessment and control measures for such strictly regulated operations. The move towards Net Zero may mean that more renewable energy producing assets will find their way within the 500m zone, and this project confirmed the feasibility of installing such a device in that zone.

During deployment, the exclusion zone monitoring system was subjected to the full brunt of the North Sea, successfully surviving 10m storm seas without damage to the WEC or the externally mounted exclusion zone instrumentation. The OPT buoy was towed back successfully to shore.

Mike Kearney, Project Manager, InterMoor Limited said: “The project showcases our ability to develop fit-for-purpose mooring and installation solutions for a new product whilst leveraging our extensive offshore experience to deliver success. Wave energy converters are now truly emerging in the offshore renewable energy sector. This R&D project was a first of its kind for InterMoor in the North Sea, and we aim to stay at the forefront during this period of energy transition.”

As operators move towards decarbonisation, this project illustrates how the use of bespoke procedures, lighter mooring equipment and smaller vessels can contribute to both a reduction in the project’s carbon footprint and improved operational efficiencies.

The project showcases our ability to develop fit-for-purpose mooring and installation solutions for a new product whilst leveraging our extensive offshore experience to deliver success. 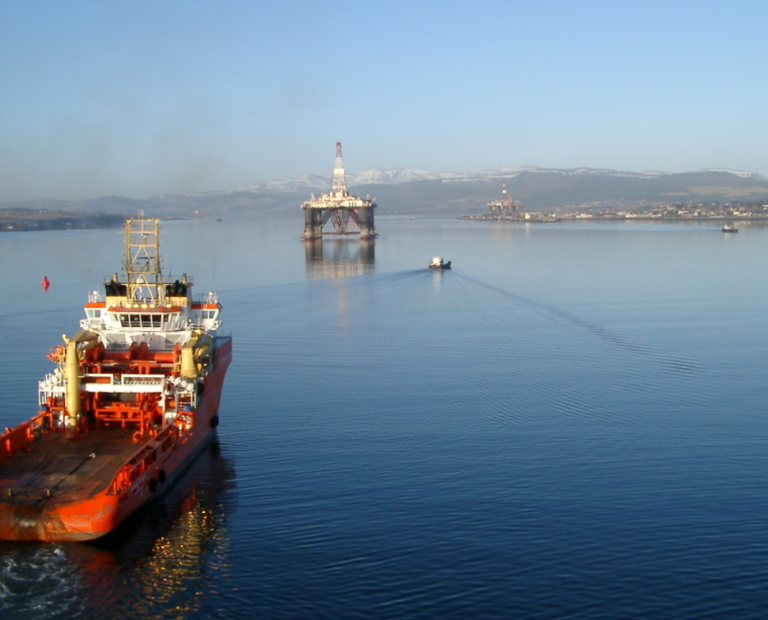 Acteon’s solid domain knowledge in mooring design and offshore mooring operations spans the globe. We have installed some of the largest offshore assets in all water depths. We provide an integrated service covering the entire project lifecycle, from engineering, mooring design, procurement, and installation, through to maintenance and decommissioning.