To develop a strategy for safe deployment, lowering and installation of artificial lift manifolds (ALMs) from an anchor handling vessel (AHV); conductor installation off the rig critical path using AHV and transport barge; and deployment/recovery of deepwater hammer from AHV.

The scope of work performed by InterMoor, a brand in Acteon’s Engineering, Moorings and Foundations division, included installing eleven 36-in x 50-m drilling conductors, two templates, a guide for the caissons and a foundation for the ALMs at water depths 1,920-m (6,300-ft). Six 48-in x 60-m caissons were installed and driven through the template.

Tasks also involved welding the conductor sections and using a transport-and-launch barge to carry the conductors out to the site. This was a bespoke barge manufactured to a tight timescale and included an InterMoor designed conductor side-launch system for keelhauling the conductors to the anchor-handling vessel (AHV). 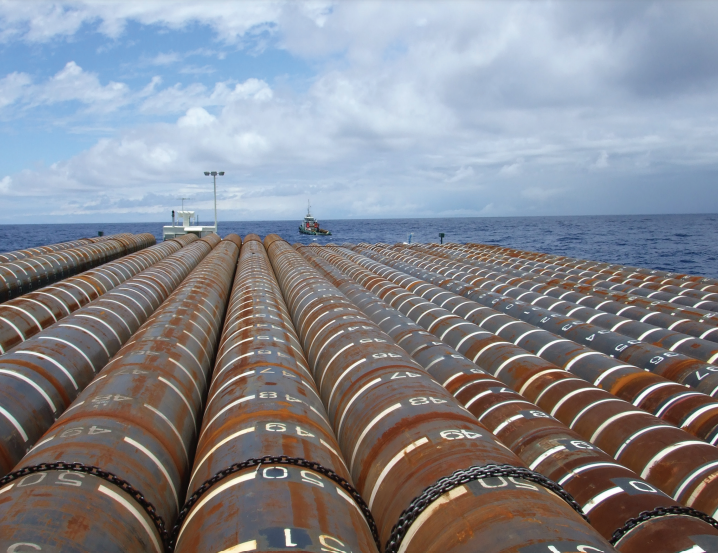 For the 36 inch well conductors it was important that the conductors were installed off the rig critical path and for the 48 inch ALM conductors the critical issue was the accuracy of the conductor height for subsequent manifold placement. Tolerances were to install conductors within 0.5-m horizontally and 1 degree of vertical inclination; and install ALMs within 0.5-m horizontally and 1.5 degree heading. Large diameter pipes had been installed with subsea hydraulic hammers in the past but traditionally these
installations have been from large crane barges or construction vessels. Such vessels have the advantage of offering a very stable working platform, but come at a high cost and limited availability. The challenge was to utilize the Operator’s AHV for both installations.

To maximize control during the installation of the conductors from the AHV, InterMoor applied its compensated anchor handler subsea installation method (CASIM). This method included performing dynamic lowering analyses on the conductors and the hammer to be used, and conductor driving analysis and procedures. As part of the CASIM service package, InterMoor supplied two of its 6-m heave-compensation devices – single-unit cylinders to act as shock absorbers.

InterMoor selected the MENCK MHU-270T deepwater hydraulic hammer, which has a driving energy of 270 kJ (at a water depth of 1000-m) combined with MENCK’s girdle-type electro-hydraulic power pack. Generating hydraulic power at depth, rather than at the surface, helped to minimize the hydraulic hose length and reduce energy losses. This method is also known to reduce environmental risks – as hydraulic fluids do not have to be pumped over long distances. The conductors and the two templates for the gas lift manifold were installed offshore from the AHV between Q4 2007 and Q1 2008.

The subsea hammering concept was particularly beneficial for the 48-in caissons in the ALM templates. InterMoor’s novel approach created valuable project management benefits. Using an AHV enabled InterMoor to keep the conductor installation activity off the the drilling rig critical path. Industry firsts included deepest use of a subsea hammer, first use of a subsea hammer from an AHV, the deepest pre-installed conductors, and the first pre-installed conductor from an AHV.

The concept of pre-installing conductors off the drilling rig’s critical path, was demonstrated to be feasible in water depths in excess of 1,900-m. This was a concept-proving project that could potentially benefit larger-scale projects in less onerous operating conditions.