Several different design approaches are being taken with the mooring systems of floating wind turbines. One approach that is being followed by multiple developers is the application of a 3-leg mooring system. Such mooring systems offer a significant reduction in procurement and installation costs.

Challenges of a 3-leg mooring system

While a 3-leg system loads the anchor in a conventional manner (i.e., in-plane) during normal operating conditions, in the event of a line failure, the unit is kept on station by only two lines. This can result in a significant change in the direction of pull at the anchor point. The images below illustrate this scenario. 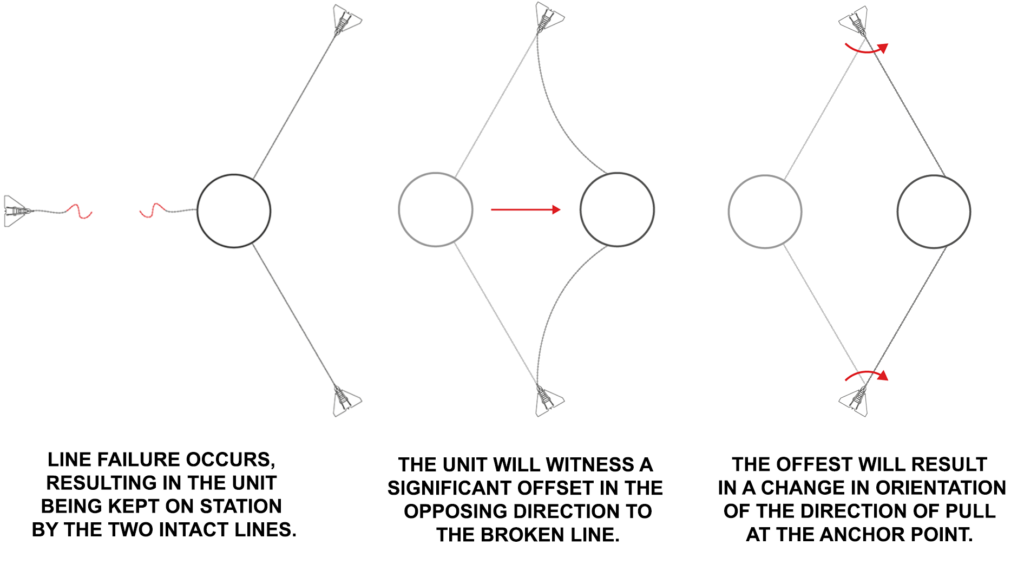 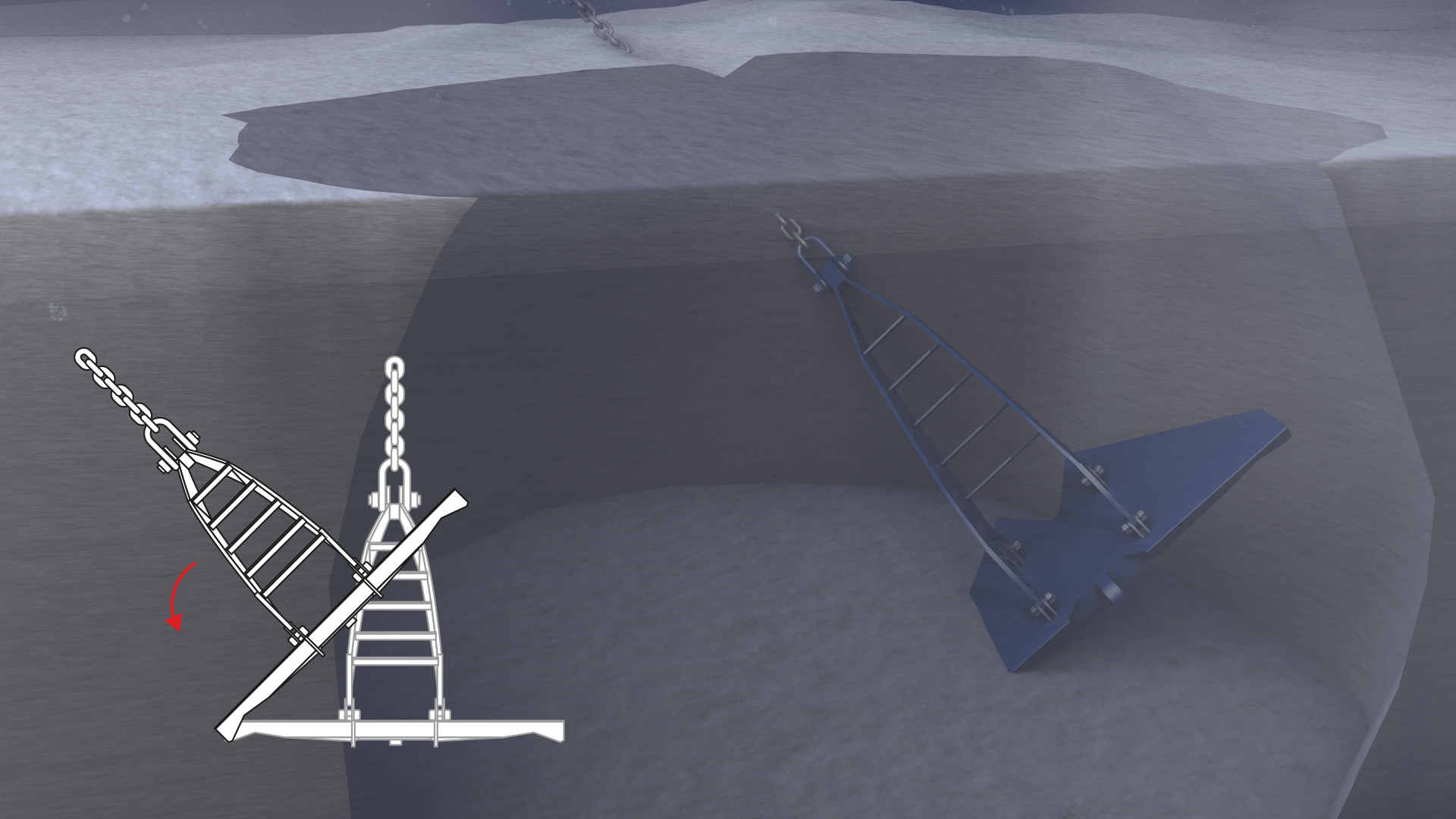 To ensure that the unit is kept on station, and no further line failures occur, it is important to confirm that the anchors’ holding capacity is not compromised. This will depend on several factors, such as the soil conditions, the magnitude of the applied loads and the out-of-plane angle.

In a uniform soil profile of good anchoring conditions, i.e., soft/medium clay or loose/medium dense sand, the general behaviour of a drag anchor will be for it to reorientate and drag in the new direction of pull. The drag distance witnessed will depend on numerous factors specific to the mooring system and location. An illustration of this behaviour is shown below. 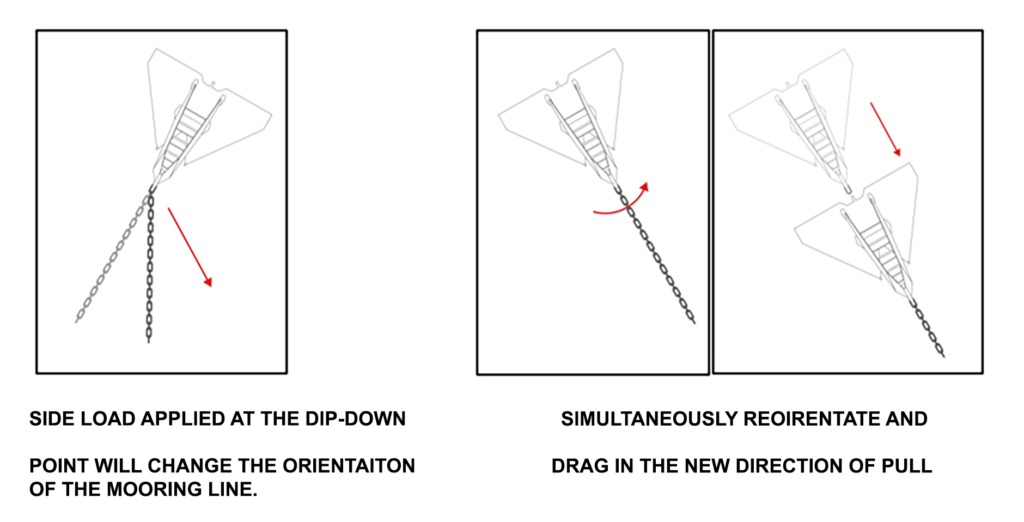 It is also important to note that the side loading of a drag anchor also presents potential risks to the anchor’s holding capacity. Some of the main risks that could be encountered are:

To confirm that an appropriate anchor has been selected for the given mooring system and soil conditions, it is important to perform a site-specific analysis in order to confirm the following:

To accurately confirm the suitability of the anchor, it is important that the anchor assessment loading and soil conditions closely represent the site conditions, as these variables can have a significant impact on the anchor.

To address this requirement, Bruce Anchor, a brand in Acteon’s Engineering, Moorings and Foundations division, has developed a centrifuge testing method that can be used to perform a site-specific side load assessment of drag anchors.

Centrifuge testing is a testing method that is used in geotechnical engineering to closely replicate site conditions. It works by rotating the testing apparatus at a high-rotational velocity in order to increase the g-force applied to the testing apparatus. This results in increasing the shear strength in the soil profile, which along with the soil conditions, can be modified to accurately represent a given site.

However, if the g-force is increased in the testing apparatus, the shear strength profile of the test will also increase. Based on the above example, if 10g is applied to the 1.5t scaled anchor test, the anchor would interact with a soil shear strength of 100kPa at 1m depth, correlating to the large-scale anchor installation.

The below image illustrates this example. 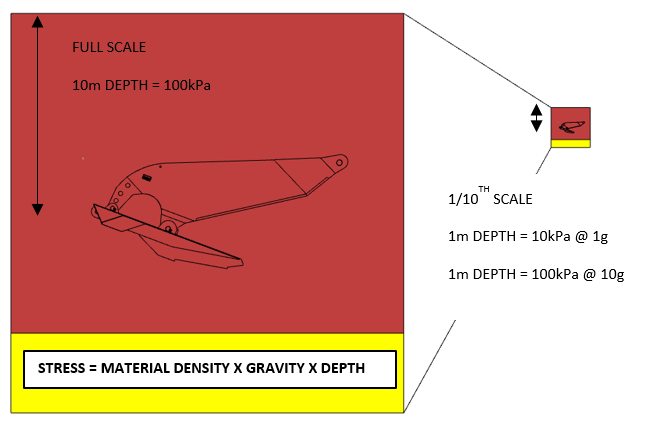 The centrifuge testing method that Bruce Anchor has developed enables the anchor to be both pulled in-plane, representing conventional installation methods, and sideways to an angle of up to 90 degrees. This allows for the tests to consider a large range of loading conditions.

The testing method that can investigate the effects of side loading of the anchor can also be applied to other unconventional loading conditions, such as anchor uplift, and to challenging soil conditions. All these will be challenges for the floating wind industry as it develops.

Our Moorings and Anchors segment is available to support you with your next floating wind project, from feasibility study and mooring design to equipment procurement and offshore installation.